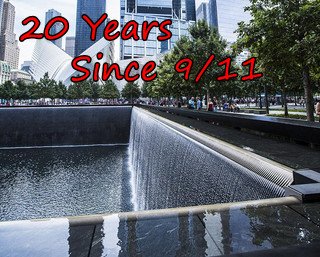 It has been 20 years since 9/11. 7300 days since it happened. We recently watched a number of TV programs on it, and how the world has changed.

Just like people asked – what they were doing the day President Kennedy was shot, it is the same question, here. What were you doing on 9/11 ?

Living in Victoria, BC at the time, I had purchased some financial charting software and a data stream for stock and commodity data. The data went into the software, and the software was able to create many stock market charts, that I would use to make trading decisions.

The markets opened 6:30 am in Victoria, and it was 9:30 am in New York. One of the World Trade Centre buildings had a large antennae on top of the building, from which the stock market data was broadcast all over the world.

I had just opened my charting program for the day, and within a few minutes, my one minute bar charts stopped ! I wondered, what happened ? A few minutes later I get a phone call from a friend who said, turn on your TV.

Not only did it stop the stock market, but it was the start of many changes in the world.

One of the programs we recently watched was, Disruption: 20 Years of Global National. The BC TV channel had only started a week prior to 9/11, with Kevin Newman as the news anchor. The program talked about how 9/11 kicked off a series of worldwide disruptions that they covered.

This was an excellent show, that you can watch on YouTube at this link –

Last night we watched the 9/11 show about how Gander, Newfoundland ended up hosting about 7000 airline travellers landing in their town of about 9000 residents !

It was a great show of how they took a tragedy and provided an unforgettable welcoming for 5 days to these stranded world travellers.

At the end of the film one of the residents said – they needed food, clothing, and shelter, which we gave them, but we also gave them love. The whole Newfoundland story went on to be a Broadway play, to tell the world the story.

It was a herculean effort of Gander and the area for sure. It makes me proud that Canada helped so many people so well.

Come From Away movie, is worth watching and is available on AppleTv and other streaming services.

Bad Things Rub Off Too

I’m born and raised in Canada. I have always seen our country as a well run, conservative, non-violent, peaceful country, and the Gander story shows this well.

But in this day and age of the internet and the 24 hour news cycle, providing a constant stream of news, and tweets, bad things can rub off too.

Sleeping Beside an Elephant

Because Canada sleeps beside a big elephant called the United States, when the elephant coughs we often sneeze. I guess it was only a matter of time, that more extremist attitudes and demonstrations would come to Canadian soil. This is what I have see in the last few years.

Most of these attitudes and actions are present in Canada’s larger cities, where there is the larger amount of stress. There has been an uptick in violence in general, and specifically against oriental people.

Lately there has been demonstrations against the vaccine card rollout in BC, and some of the Federal Election rallies, which are becoming more radical then before.

A few years ago we moved from an urban centre to a small country town, to enjoy a slower pace of life. I don’t miss the higher density of people and traffic in the larger cities, both of which add to the stress of living there.

Living in a small town, I feel we are further removed from the bad things rubbing off, but it may happen in small town Canada someday too.

Every Form of Refuge

One of my original songs is titled – Every Form Of Refuge, and the chorus lyrics can sum up this post –

Every form of refuge has it’s price

Every form of refuge has it’s price

Whether you live in a tent or a mansion, you pay a price