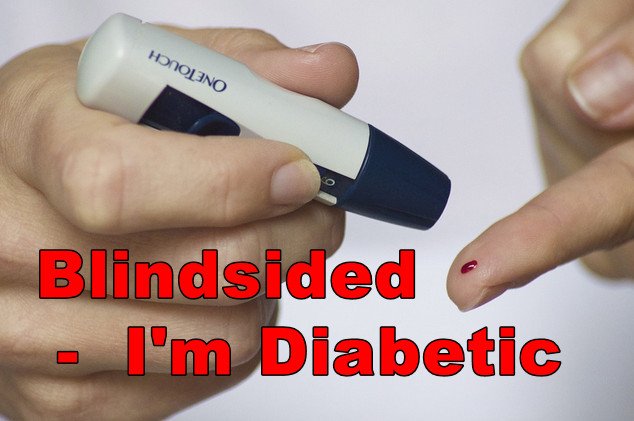 I grew up a healthy kid, I never thought I’d become diabetic.

I grew up the oldest of three boys, with a stay at home Mom. Mom had grown up on a farm and was into providing us good healthy food. Her home cooked meals kept the family healthy and there was no major illness in the family.

One of the rules at meal time was to eat everything on your plate. I learned to do that, and do it well. I loved to eat, and liked most food.

I did hate liver and Mom would cook it about once a month or so. As our family rule went, I had to eat everything on our plates. Liver night was tough for me. I ate every else on my plate and that liver just sat there.

One supper, I cut off a small piece of liver, and started to chew it. I swallowed it, it went down, and my stomach reacted. I threw it up all over my plate !

Mom and Dad knew I was not faking that reaction, so I was then exempt from eating liver.

I Loved To Eat

Around 1980, married with two young kids, McDonald’s came to Winnipeg. We started the habit of eating out every Friday night as a family. I remember being able to have supper at McDonalds for about $5.00 for a family of four.

In the work force as a young salesman having lunch appointments in restaurants was common, and I ate anything I wanted. I gave no thought to the health consequences of what I was eating.

A decade or so, later I started growing a spare tire around my middle. I accepted it as living well and enjoying our lifestyle. Most of my peers were looking the same as me. My diagnosis was still another fifteen years away.

I did not have prostate cancer, but came out with type 2 diabetes, which began my diabetes journey.

It is a shock to hear the doctor say – You’re a Type 2 Diabetic !

The only person in the family I was aware of who had diabetes was my maternal grandfather who was diagnosed late in life, and seemed to ignore it for the rest of his life.

After I was diagnosed, I joked with my Mom saying – Mom, it’s your fault I am diabetic because you made me eat everything on my plate, when I was a kid. Of course, we both knew that was not true.

There are two types of diabetes, type 1 and type 2. Type 1 diabetics do not produce any insulin in their bodies, and have to take insulin to maintain their health. They make up about 10% of all the diabetics.

For Type 2 diabetics, they do not produce enough insulin to keep the blood sugars down. It is treated first with oral medications like Metformin and others. If that does not work, then insulin is prescribed.

Type 2 diabetics make up about 90% of the diabetics and are the fastest growing group. Type 2 diabetes is growing at an epidemic speed.

The Canadian Government put out a report titled Diabetes In Canada in 2017 ,

About 90% of diabetics are Type 2 as reported in this Canadian Government Type 2 Diabetes report .

Diabetes Canada says one out of three Canadians are living with diabetes or prediabetes, yet many of them do not know it. Read the Diabetes report here .

Hair on My Toes

After being diagnosed, I was sent to a diabetic class at the hospital, taught by nurses, who provided good information.

That was interesting information to have, and I still have hair on my toes some twenty years later.

I was told to change my diet. That’s easier said than done. Changing your diet is hard.

I’m not surprised that I became diabetic, because I loved to eat. I loved carbs and sugar – like bread, sandwiches, bakery good, and desserts. Now I was supposed to give up sugar and carbs.

Both sugar and carbohydrates when eaten are turned into glucose when digested. Eating carbs and sugar for a diabetic is like throwing paper on a fire, it spikes the blood sugar.

There’s A Pill For That

I was started on an oral medication and told to check my blood sugar twice a day. Every three months going forward, I had to go for an A1C blood test, and then to my doctor to review the results.

The major Symptom of Type 2 Diabetes is having too much sugar in the blood. The hemoglobin A1C test, measures the average blood sugar, over 3 months.

The A1C blood test is done every 3 months and is an important number to know.

The A1C numbers tell you what category you are in.

If your A1C is

All this diabetic information takes time to understand. The doctor only has time to tell you the basics. They don’t have time to educate you other than a few bullet points, and maybe encourage you to exercise, and watch your diet. The rest is up to you.

I started out as an ignorant diabetic, as I suspect most diabetics are. Now I needed to educate myself.

It Works For A While

Over time, other oral medications were tried or doses changed. The doctor tries to find the sweet spot with a few different medications.

After I few years I found that when starting a new medication, the results can be good. But after the body then gets used to the medication, it does not work as well, and the good results start to wane. The result is, you have to increase the dose to get the same result.

I started to see this scenario play out, time after time, with new medications that I was prescribed. Over time, I realized Iwas not getting better, but getting worse.

About seven years later, the medications were no longer adequate to keep the blood sugars down and my A1C was over 7.5. My doctor said I should start insulin injections. I was hesitant. He said what I did not want to hear – you will need to sooner or later.

I felt like I had failed, having to now take insulin. And it worked at getting the blood sugars down.

Taking too much insulin can kill you, so you need to respect it and use it wisely. It does what it is supposed to do, get the sugar out of your blood.

I become resigned to using insulin as needed, my A1C numbers become better and I am satisfied.

This is only the first chapter of my diabetic story, and I’ll continue it in the weeks to come.

I have read a number of diabetic books, trying to educate myself on the disease. Below is a list of excellent reads authored by a number of doctors. Check out this Diabetic book list for more information.