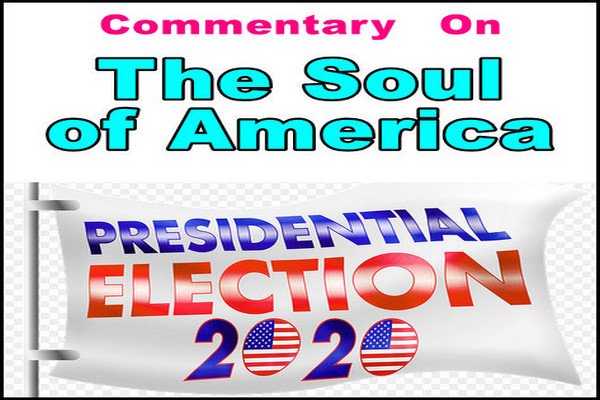 Commentary on The Soul Of America – documentary

The US election is happening today, and even Canadians like me will be paying attention to it. When you live beside an elephant, when it sneezes, you need to pay attention.

I watched a TV show last week called The Soul of America: The Battle for Our Better Angels.

Our Battle for Our Better Angels

It is a documentary from interviews and seminars by the author Jon Meacham, on his 2018 book of the same name.

Jon talks about making some sense out of the forces surrounding the election, by looking back on US history to other turbulent times, and how they were managed.

Being interviewed on the Today show, the interviewers ask Jon – what is the soul of America ? He says – “the soul of each person, is a daily struggle between their better angels and their worst instincts.”

Other Turbulent US Times

As a historian, Jon points out other turbulent times for the US.

He discusses the McCarthy era in the 60’s. Congressman Joseph McCarthy gained popularity causing fear, stating there were over two hundred communists working for the state department.

He pushed these headlines, but had few details to back his allegations. And that lack of detail and truth was what ultimately made him loose popularity.

He says that all democracies get wrong leaders from time to time, but they correct it at the next election.

Jon talked about how the American Japanese had their rights taken away during world war two, and put into camps. Looking back from a historical point of view, most see this was a bad decision. But no one gets away with no mistakes.

He talks about the purist VS the pragmatist. He says that great decisions are often made when we change our mind, from the position we had yesterday. Things change, and leaders should change their mind when required.

Jon says good reasoning is at the foundation of our democracy, and it is a daily struggle between emotion and reason.

Lyndon Johnson’s Civil Rights bill in 1964 and 1965, was a win for our better angels. Johnson easily could have not passed the bill. But he knew public opinion had changed. The passing of the Civil Rights Bill, was the end of the American Apartheid.

Curiosity, to be open minded to what others think, and sometimes they will have an Ah-Ah moment, which can lead them over time, to change their mind.

Humility, to learn from history.

Empathy, to try to feel what others are going through in their situation.

Jon says we are in a repeat of the 1960’s Civil Rights situation. There are strong feelings on both sides.

History says we have been here before. Will we give in to our worst instincts or our better angels ?

History As Our Guide

“history will be our judge, but it can also be our guide. “

“Our story soared when we built bridges – not walls, when we lent a hand – not pointed fingers, when we hoped – not feared. “

Computers Are Not Emotional

The thought occurred to me – computers are not emotional. They are programmed with reason, not emotion. Based on that, I don’t think computers can make an emotional decision.

From that standpoint, it is a good thing that computers are running more and more parts of businesses and society. Until we get to Artificial Intelligence.

On Friday, Oct.30, Tom Friedman wrote an excellent opinion article in the New York Times titled – Trump Has Made The Whole World Darker.

I feel Tom summarizes today’s big picture results to some of the historical similarities, mentioned in Jon Mecham’s documentary.

It is worth reading this article. I quote the first few paragraphs from his article –

There is no escaping it: America is on the ballot on Tuesday — the stability and quality of our governing institutions, our alliances, how we treat one another, our basic commitment to scientific principles and the minimum decency that we expect from our leaders. The whole ball of wax is on the ballot.

The good news is that we’ve survived four years of Donald Trump’s abusive presidency with most of our core values still intact. To be sure, the damage has been profound, but, I’d argue, the cancer has not yet metastasized into the bones and lymph nodes of our nation. The harm is still reversible.

The bad news is that if we have to endure four more years of Donald Trump, with him unrestrained by the need to be re-elected, our country will not be the America we grew up with, whose values, norms and institutions we had come to take for granted.

Four more years of a president without shame, backed by a party without spine, amplified by a TV network without integrity, and the cancer will be in the bones of every institution that has made America America.

Let’s hope that more civil unrest and disturbance does not break out.