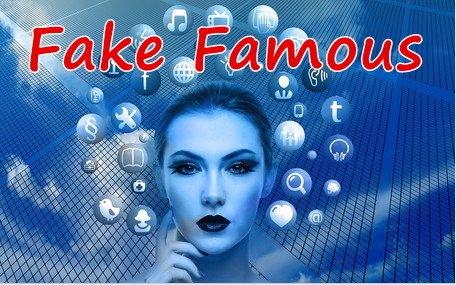 I have been posting my music on YouTube and Facebook for a few years now, with very limited success.

A few months ago, I watched a TV show titled Fake Famous. It is a documentary about a film maker who took three relatively unknown people on social media, with less than a thousand followers and tried to make them famous by getting them a million followers.

The documentary can be found on HBO, if you would like to watch the whole movie, or search your TV listings to see if it will air soon.

It was surprising to see the lengths that many social media people will go to, to try and be famous. The movie showed the fake photo shoots that were done – in a rented on the ground private jet, using a toilet seat to be the window of an airplane, and a kids pool with rose petals in it, to look like a day at a private spa.

I think we have all seen glamorous photos that seemed “over the top” and just not grounded in reality. Sometimes those kinds of pictures draw you in, but in the end, they seem to be UN-connected to reality.

One of the things that surprised me a few months ago, was when I got an email thru my website, stating that they can get me more followers, for a price.

This means money at YouTube, as once you have 1000 subscribers and 4000 annual watch hours, you can start to earn a portion of the advertising money your channel generates.

Of course, some social media accounts state that this is against their policy, and can suspend or turn off your account if they know you have done this.

I know someone who said that YouTube turned off his account, because he was playing all his own videos from his own computer. He said his daughter was the one who was doing it. But it did not matter, he no longer has a YouTube account.

I got my first XT computer back around 1985, and thought that life will become more exact for precise with computers processing parts of our lives.

I feel that happened to some degree, in that we trust or most of us trust, in dealing with computerized billings from almost every company we deal with.

This trend has not stopped in the last thirty years, and shows no sign of stopping.

Over the years, we have seen the rise is computer fraud and theft. In using our online machines and smart phones, fraud has increased exponentially because we can be defrauded at every step of the transaction.

It seems we learned to trust computers generating our billings, and then hackers figured out how to use the same process to steal money from us.

With the rise of social media, we all have a chance to participate if we want to. And with a big percentage of the world using Facebook, it appears that most of us want to participate in social media, at least a little bit. But some people want to use it to become famous, even if it is fake famous.

Now many online platforms are being used to disseminate misinformation and/or one sided views, around a number of social issues. Even the 2020 US election was not immune to mis and dis-information.

It seems that most everything can take a online fake form or posture in today’s world. The key is whether we react to it. Some posts get us emotionally involved.

When I write a good song, I am on an emotional high posting it on social media. But not everyone feels the way I do about it. I can’t force people to like my music, nor would I want to.

The three people who took part in the Fake Famous movie, voiced their follow up thoughts on trying to be fake famous.

Watch the short follow up video on how they feel about it, after the fact, at the link below.