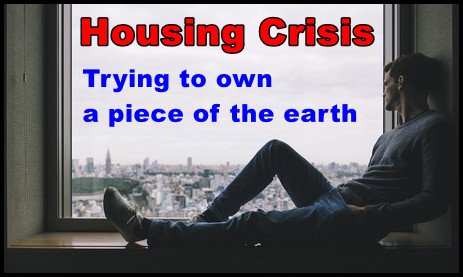 It seems that almost every month, there is news story about the housing crisis in Vancouver and surrounding area. Young families are almost shut out of the housing market, with such big price tags to try to own a piece of the earth.

Things Were Different In The 1970’s

When I purchased my first home as a young Dad in Winnipeg, MB in 1974, the real estate landscape was easy for young families to buy their first home.

My wife and I had rented a high rise apartment with underground parking for $166. a month for about two years. We were expecting our first child and had managed to scrape together a down payment of $1000. My income at the time was about $800 a month.

Starter homes in Winnipeg at the time, were going for around $15,000, and after a lot of looking we bought an old house in an old neighborhood for $15,500.

We obtained a mortgage through one of the major Canadian banks with no trouble, and the mortgage payment was around $160. a month.  The house needed work, and it was on that house, that I learned to do renovations and general house repairs.

Two years later we had our second child, and although the home was a 3 bedroom house of about 800 square feet and a basement, we decided to move up, and sell the home.

After a few years of ownership, we sold our first home for around $28,000 ! We had almost doubled our money in a few years. It was a windfall for us, as we never had had that amount of money in the bank.

But today rents have increased much higher than household incomes. The link below shows a nice chart of this widening gap since 1960.

Problem Worse Than I Thought

I recently watched a documentary titled Push, which showed that high priced real estate is happening around the world. Check out this documentary at these links –

The film goes onto find that the Blackstone Hedge Fund, is one of the companies that is going around the world purchasing real estate. They currently own about 50,000 housing units worldwide.

For hedge funds and investors housing has become an asset, not a place to live. The problem is worsened by the fact that some of Blackstone’s clients are pensions plans who are looking to make a better than average return on their client’s money. This could be a Teacher’s Pension Plan, or any other large pension plan, that needs to get a return on money.

Housing Is A Human Right

One of the main points of the film is that Housing is a Human Right with most all countries. But many countries are not providing decent afforable housing to many of the poorest citizens. They say that many countries sign treaties to do this.

City managers from large cities around the world are uniting. They have formed a group to look at this kind of real estate dominance and what to do about it.

There’s no word on if they have come up with any solutions yet. Things many opposing forces in society, it may have to be a two fold process. One to slow down this trend of big investor real estate buying, and second how to make housing more affordable again for the average family.