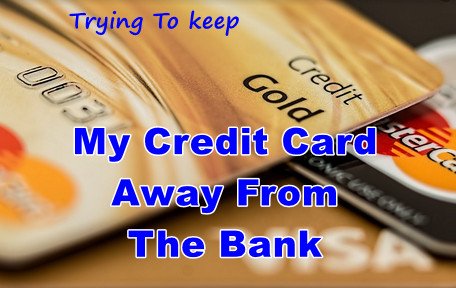 Trying To Keep My Credit Card Away From The Banks

I have dealt with one of the five major Canadian banks, since I was a kid.  Now I’m trying to keep my credit card away from the banks, but it is harder than you might think.

Over the years, I have had personal chequing accounts, business accounts, savings accounts, RSP accounts, loans, mortgages, TFSA’s and credit lines, and of course credit cards with them.

In the early 2000’s, while doing Christmas shopping, my credit card number was stolen, probably at the one of the stores I was shopping at. Not the credit card itself, but the number on the card .

In January, my wife said we did not get our credit card statement. I thought maybe it had been lost in the mail, so I mailed in an amount I thought I owed for that month.

The next month, again I did not receive a statement, so I phoned the bank. After the usual identity questions, the telephone rep asked me, “did you change your address on your accounts from Victoria, BC ( where we lived at the time ) to Montreal, QC ?”

“NO” , I answered ! All my banking information had now been compromised. The bank rep immediately cancelled our credit cards and froze our bank accounts.

The Bank Employee Made a Mistake

With the various security questions that are asked regarding most financial transactions these days, I wondered how someone with just my credit card number, would have been able to get by the initial questions, and say – “Change the address on all my accounts. “

Would the bank telephone person, not asked what accounts they had ? And failure to know which accounts I had, should have been a signal that something was amiss.

We had to go into the bank and open new accounts, and the bank mailed out new credit cards to replace our old ones.

When I asked how this could have happened, it was brushed off as someone made a mistake, as if they would not be able to track it down.

It is safe to assume that every bank transaction has various features recorded, including the bank rep who did the transaction.

Fortunately, no money had been taken from our accounts. But the bank had to pay for the $700. +/- of credit card transactions, that was charged fraudulently to my credit card.

Give Us All Your Business

For years now, the banks have advertised to the public to bundle their services together.  I think it was successful years ago, but I think people are rethinking that proposition.

I Un-Bundled My Banking Services

Soon after getting the new accounts, I decided that the bank did not deserve having my credit card business.

I applied for a couple of credit cards, that were not with a bank that I had an account with. This way if the credit card was stolen, they was no other accounts that were attached to it, and therefore nothing more could be stolen.

You’d think that was the end of the story, but it was not.

Can’t Get Away From The Banks

I applied for a credit card, from a US bank, being advertised by community group I was involved in. It worked fine for about ten years, until I got a letter saying that the Canadian customers of this community credit card , were being bought by the one bank I had cancelled my credit card from !

I stopped using that credit card now being owned by the bank I wanted to Not have hold this card.

Can’t Get Away From The Banks Again !

I applied to another US bank for a stand alone credit card. Again it worked fine, until five or so years later. I got the same letter again, saying the Canadian customers of this credit card are being sold to the big Canadian bank I was trying to stay away from.

Clearly this is a marketing strategy of the banks. When the competition starts getting bigger, they buy them out, to capture their customer base.

This gives rise to another discussion of big businesses “controlling the market place” by limiting the number of competitors.

The banks had their chance with all my banking business. I no longer give all my business to one bank. I go out of my way, to spread my business around to different financial suppliers, so no one supplier’s mistake will affect all my accounts.

Are you at risk by having all your finances with one institution ?