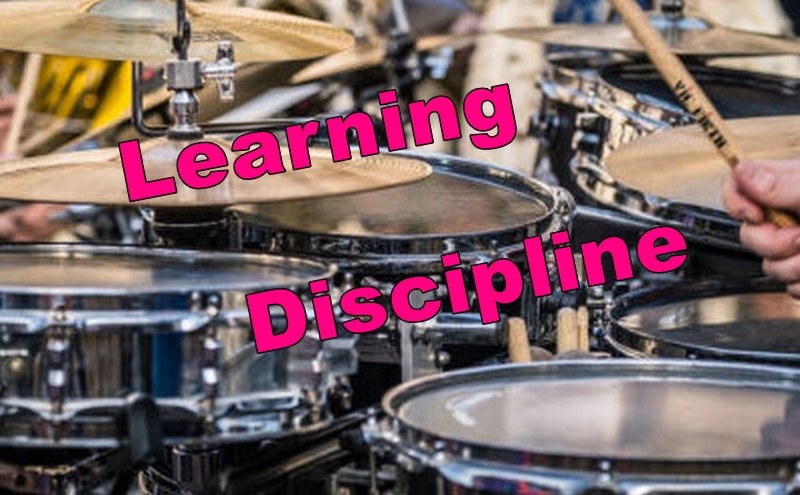 Discipline as a Boy

Discipline was a skill that I learned as a boy, when I had the desire to play drums.

Around the age of nine, I saw Gene Krupa the famous drummer, playing a drum solo on the Ed Sullivan Show. I wanted to do that. I was drawn to the audience applause. After a couple years of asking for drum lessons, my parents finally relented, as they thought my desire would fade away.

I got only a pair of drumsticks and a lesson book, because my parents still thought my desire to play drums would go away. My drum teacher told me to practise on a book, and I liked playing on my bed as well.

The beginnings of learning discipline started here. I was happy to practise my rudiments and other exercises everyday. I enjoyed learning how to make each hand play together for rudiments, or to make each hand and foot play a different pattern when playing a drum rhythm. That was called independence.

I practised without a drum kit for two years before I got my first one. It was a standard drum set, a Japanese make, red in colour. I was very happy with it. The unappealing sounds that my bed made when I practised, now produced a whole different sound playing on a real drum kit. My Mom said the first few months of practise were the worst, because it was more noise than music.

Drumming Independence was like dividing your brain into four parts, one for each hand and one for each foot, and learning how to make them each play a different pattern.

In a few years, I found other neighbourhood guys who were playing other instruments, and in my teenage years, I was playing in my first bands, and practising in our unfinished basement.

My practising turned me into an accomplished drummer for my age, and other musicians would compliment me on my playing.

A few years later, our local church would let the band practise in the basement each week, and I would go there almost everyday to practise my drums by myself.

To Practise or Not

This was where discipline starts to get tested. There were days when I did not want to practise, but I would most days, because I loved the accomplishment of learning a new rhythm that required me to learn a new rhythm pattern on a hand or foot.

I learned that discipline required you to do something everyday for a long time to become proficient.

Today they say that it takes 10,000 hours to become proficient at something. That is about 5 years working a full time job.

Over time I discovered that latin and jazz drumming were a couple of the more advanced drumming styles that required a lot of Independence between for four limbs. One advanced latin drummer I like is Horacio “El Negro” Hernandez. Watch him play in this video –

A few years later, now a family man with young kids, and becoming unemployed because of “discos” displacing musicians in 1977, I changed careers to be an insurance salesman.

Insurance selling was a tough business. They called it the major league of selling. I found that I could apply the same disciplined process that I took with learning drums, to insurance sales. There was a daily process that required me to phone prospects to obtain appointments, and then make sales at those appointments.

Discipline was also a part of my life, as I became a self employed salesman, and had no manager to keep me on track. I attended many seminars over the years, providing motivation to improve various aspects of our personal and business life.

Zig Ziglar was one of the speakers I heard. He quoted an inspirational quote from Ralph Waldo Emerson –

For me, discipline was part of the process.

A few years later, I expanded my offerings, moving out of my home office and into a retail storefront as an insurance and real estate brokerage. I was now an independent business man, and found that moving ahead in life often required discipline and time.

While drumming was no longer my full time job, I did continue to play periodically over the years, and started making drumming videos around 2012. Here is one from that era, that had a nice cowbell rhythm to it – https://www.youtube.com/watch?v=f9NVmiwmc5Y

We can probably all point to an important skill we learned growing up. For me it was Discipline and it served me well through the years.