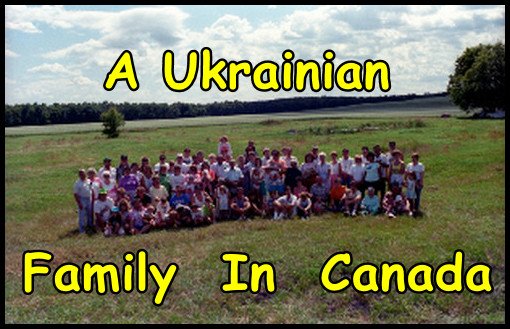 I am of Ukrainian background. From my father’s side of the family, there are Polish and Ukrainian ancestors in the family.

I took a Ukrainian language class in junior high. It is a difficult language, because of the complex endings of the words for different tenses etc. The language is more complex than french, which I took for many years in school.

Only my grand mother spoke Ukrainian but she lived out of town, so I did not get a chance to practise it very often. As a result, after two years of studying the language, I stopped taking the class, when I moved on to high school.

Back in the 80’s a client was organizing a big family reunion for her Trudeau family. She said there would be about 1000 people attending the weekend event. I was amazed that there were extended families with so many people.

I said my wife was a Trudeau. My client asked the names of her Mom & Dad, and her Dad’s parents. She thought for a minute and said, “ You’re not even part of this clan ! ”

My father was interested in genealogy back in the days of DOS and the XT computer, in the later 1980’s.

He purchased a genealogy program and started entering our family tree information, which was mostly birth-dates, marriages, children, and death dates.

This was before Windows, so there were no pictures to accompany the data.

He would mail out letters to extended family each year, asking for any updates of births, marriages, and deaths. He would then update his computer records.

The family held a family reunion in the summer of 1990, which was the only one, for that side of the family that has been held.

It was fun to meet new family and spend time with them. It was held on a farm outside of Winnipeg, and a group picture was taken to commemorate the occasion.

I forgot the name of the genealogy program Dad had. It had a maximum number of records of 64,000. The program stated that if we each go back 16 generations, and log all our parents, grand-parents, great grand-parents and so on, at 16 generations there would be records for 64,000 ancestors.

Another way of stating this is, we are each the product of 64,000 ancestors, going back 16 generations. That is an impressive statistic.

My Dad decided to put the family’s genealogy on display for the Family Reunion.

I helped Dad hand print the names of each of the six family siblings that came to Canada, on a large piece of fluorescent coloured clothe, about 4′ x 8′ in size. It took a few months work, prior to the reunion. 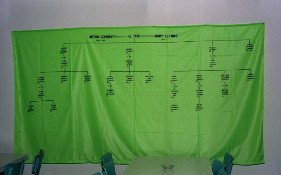 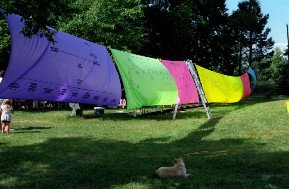 There were 6 of these family banners each on a different colour of clothe, as shown above, hanging on a clothes line. These banners were a real hit with the family.

I took Dad’s genealogy database, and added a macro program what would automatically go thru the program showing different aspects of the database. Then I made an audio cassette tape that would narrate what was on the screen.

I watch the Finding Your Roots TV show, and find it interesting. When people are shown their descendent tree going back many generations, it can be a moving experience to see pictures, and now know the names and stories of some of their family ancestors.

I have not had that experience, but wished I did.

In my lifetime I am thankful that I have not been involved in war. But there have been wars like the Viet Nam war. I suspect that each war has it’s own reason(s) why it was fought.

The Russian attack on Ukraine appears to be a personal reason. A Russian dictator wanting to expand his empire. Not much of a reason, as I see it.

The reunion ended with the group picture shown below. A memorable day for our family. Many Ukrainian people who came from the other side of the world, and made a life in Canada.

It’s sad to think that our homeland is now being attacked by Russia, to take over the country. I hope Russia is defeated. 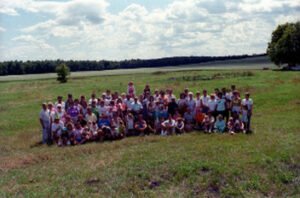