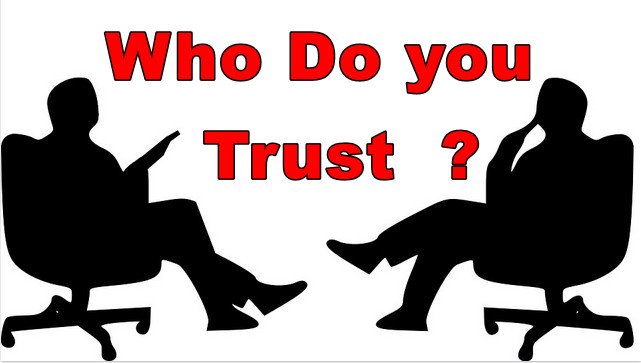 Who Do You Trust ?

The US election is a couple of weeks away, and I watch some CNN everyday.

I watched the first Presidential Debate, and a CNN commentator called it a “shit show”.

The dueling town hall meetings have created a larger gap between the candidates and their vision.

Who Do You Trust ?

I see the main issue with all elections and especially this one, is who do you Trust ?

Candidates before the election say they will do certain things. But if you have been voting for a while, you know that some candidates, once elected, can deliver on their ideas and others can’t. So who do you trust ?

When I turn on my light switch, that the electricity will be there to light up my room.

When the traffic light is green, that I can drive through the intersection safely.

When I fill up my gas tank at the gas station, that it is actual gasoline I am putting in my tank, and not something else.

I will receive my pensions at the end of every month.

When I put my money in the bank, it will not be stolen and it will be there when I need it.

My car mechanic to do the things he says and fix my car.

When you order something online, that the payment from your credit card will be made and received, and the goods will be shipped to you, and arrive in good condition.

But we have all developed some dis-trust from bad experiences.

Maybe you ordered something online, and when the item arrived you found it was not as good a quality an item, that it had been advertised as.

Trust At Every Level of Society.

Trust is required between –

Family members – the child trusts that the parents will provide them food, clothing, and shelter.

Employer and employee – that the employee will work each day, and be paid when promised.

Companies and customers – when a customer returns something to Walmart, they will get a refund.

Trust takes years to build, seconds to break, and forever to repair.

The people, when rightly and fully trusted, will return the trust. – Abe Lincoln.

Everyone suffers at least one bad betrayal in their lifetime.

It’s what unites us.

The trick is not to let it destroy your trust in others when that happens.

Don’t let them take that from you. – Sherrilyn Kenyon

I watched some of the American Greed TV series. These “loose your money” stories were of business greed, done by some unscrupulous people. Some of them focused on investment people, like Bernie Madoff, who built up trust with his customers, sometimes over many years. In the end, the customer finds out their money was in a ponzi scheme and is gone.

They trusted someone who appeared to be honest, maybe for a long time. Then they find out the “person they trusted” hid the fact that they were not being honest, and it cost them a lot of money, maybe all their money.

At the opposite side of American Greed, is an award winning CBS show called Undercover Boss, where bosses work under cover ( in disguise ) at ordinary jobs in their own companies. At the end of the show, they meet with the four or five employees they worked with, and who did not know they were the head of the company.

The boss reveals his identity, and in most cases, the boss appreciates the employee for their work. Sometimes the boss can not do the job properly. The boss will often give the employee a promotion, or a pay raise.

In addition, the boss will often reward the employee with a big personal gift like –

buying them a car,

paying their rent for a year or two,

paying for elder care for a parent or grandparent,

paying for medical treatment for their child or a family member,

starting a college savings fund for their child(s).

The employee is usually in tears upon hearing what they have received. For employees, this is a life changing experience financially.

The employee leaves the meeting walking on a cloud, knowing that the company appreciates them more than they knew.

You can watch some CBS episodes online here –

You may not like the candidates on the election ballot. For some voters, the choice is picking the best from a bad set of apples.

We have both trust and dis-trust in the world, and we make our choices based on these.

Society will decide who to trust more and get through this US election and the next, amid working towards a new normal in the middle of a worldwide pandemic.

The Only Constant is Change