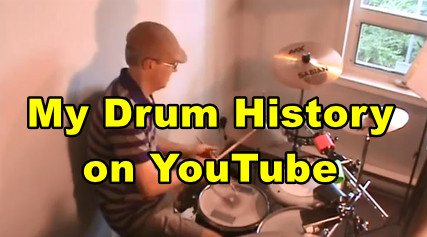 My YouTube channel has recently been approved as an OAC – Official Artist Channel. It is designated by a small music note after the channel title.

What does that mean ?

so that viewers know that this is a music channel.

In light of this development, I decided to take a look back on – My Drum History on YouTube.

Eight years ago, I had not started to play the ukulele, I was a drummer. I had been playing drums since I was age 11.

I was playing casually in bands around town, but gigs were few and far between, so I spent time practising on my own.

I took a liking to latin drumming, because it was more complex than other styles of drumming, so I spent time working on it.

You can think of drumming as splitting your brain into 4 parts, one for each hand and a part for each foot.

Each hand and foot plays a different pattern. The more complex each pattern is the more difficult it is to play it.

There was not much call for latin drumming on Vancouver Island, but I did play a few gigs back around 2008 with a latin guitar singer and her band called Bossa Loca in Nanaimo.

There were fun gigs because my latin drumming fit the band style well. The band also had a flutist, and a bass guitar.

My standard drum kit was set up with a couple of cowbells, a couple of wood blocks, a tambourine, and a set of timbales for tom-toms.

Here is a audio of the Bossa Loca band playing in 2008. You can hear the various musical effects I was able to provide using the bells and blocks on my kit. I really did enjoy playing with this band.

Take a listen to this audio only recording done from that time, and which I made into a video later.

In 2010, I was playing and practising regularly with a band called Joe Blues Band, made up of bass, guitar, drums, harmonica and lead vocal.

We did a lot of practising, and a few gigs, and our repertoire was substantially blues music.

Here is our version of Mustang Sally. I did not know it at the time, but this gig was my last gig as a drummer in a regular band.

I left my last drum gig feeling that I wanted to add more sounds to my drum kit, but there was not much more room to add more bells or blocks, because my arms would not be able to reach them or paly them comfortably. I wanted drums to be more melodic in nature.

I soon discovered an electronic drum called a Wave Drum made by Korg. I purchased one and a small amplifier to play it thru, and mounted it where a tom-tom would go on my drum kit.

The wavedrum had about 200 sounds on it, a number of them being unusual, so this was the kind of thing I was looking for.

This was a whole new world for my drumming. I spent the next couple of years practising and recording wave drum sounds played along with my drum kit.

I did dozens of audio recordings of these new drum sounds and patterns. I decided some of them were worth listening to, and I made videos of the ones I liked. These became my first You Tube videos.

Below are a handful of what I thought were the better drum videos.

Being that I had two cowbells on my kit, I added some wavedrum sounds with the cowbells to come up with a nice rhythm.

The wavedrum had many new sounds. I liked the tube sounds that I used on this piece.

The wavedrum had a long sustained bell sound, which I used as a base of this rhythm.

The graphics used here, came from a Windows program that you could put on your screen when playing music and it would come up with the changing graphics.

This video ended up getting the most views of the drum videos. I think made it attractive was the change in sound from the regular drum kit, to the wave drum at the 45 second mark.

See the My Drum History YouTube video at this link –

Sold the Drums and Took Up Ukulele

While I felt these drum videos were creative, after doing the few dozen of them, I felt that I had done what I wanted to do with drums. I decided I needed to get on the melodic side of music.

I had taken keyboard and voice training as a teenager.

After seeing the TV documentary called The Mighty Uke, I decided to pick up the ukulele.

This became my musical instrument of expression, along with singing, and what a good one it has proven to be.

I will post on my ukulele experience in the weeks to come.