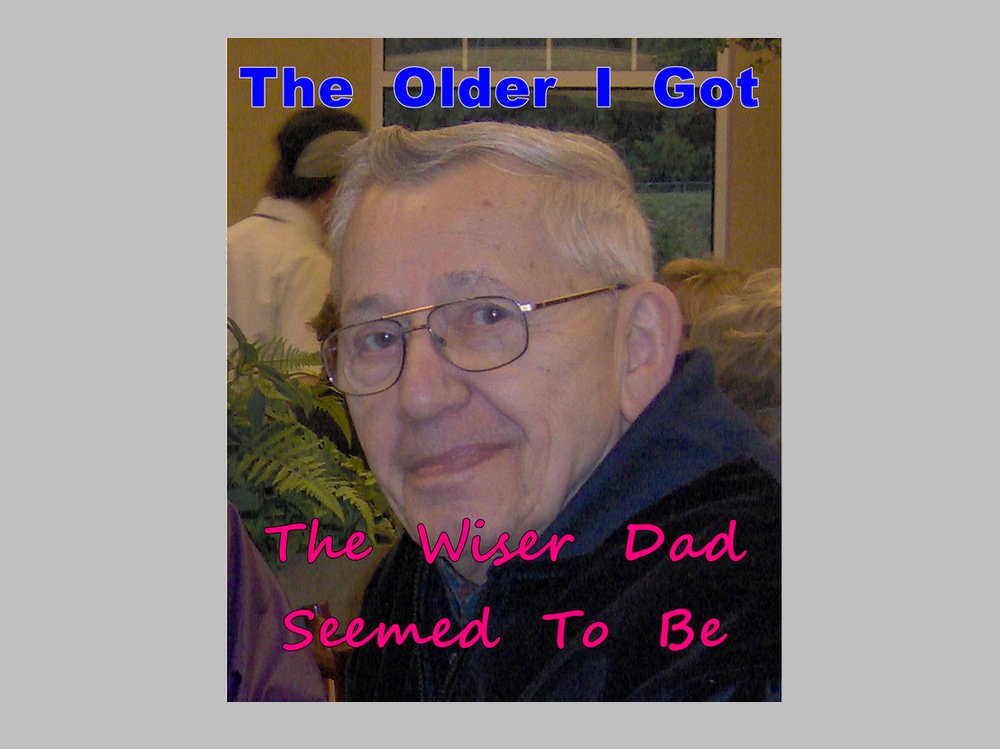 The Older I Got

The Older I Got – The Wiser Dad Seemed To Be

This is my first original song release for 2022 !

This song is written for my Dad, acknowledging his efforts to try and guide me to better decisions as I a young man. Parents want their children to have a better life than they had, and I experienced that when I had teenage children.

Having one job or working for one company for your entire career is almost unheard of today, but it was common when he was a young man. It shows the stability of the job market back then.

The railway was an above average employer, providing a steady income, medical benefits, and a pension.

Dad was about as steady a person as you could be. Was always employed, and he put a high value on having as stable environment as he could provide for his family.

Dad wanted me to get a good education. He had saved money specifically for my education. I hear more stories about people needing money to get an education, than people turning down an education. Well that’s what I did.

When I was in junior high school, Dad wanted me to go the St. John’s-Ravenscourt. It was an expensive, well respected, private boys school, across town from where we lived.

I did not want to go there because I thought I would have to take two metro buses to get there each day. I found out years later, that the school had a bus that picked you up in front of your home everyday.

As I finished high school, Dad wanted me to go to university. I did not see myself being some kind of professional, and I could not think of what courses I would take, or I would like. So I again fought the idea of going to university.

During high school, my drumming and playing in bands, was the centre of my life. My band mates were all a few years older than me, and some were going to university. But at band practise the stories about university I heard were – I quit, it’s too hard, or I don’t like it.

None of my older band mates, continued with their education. That gave me a negative view of university.

From my band mates experience, University gave me the impression that I would fail at it, and waste my time. I might as well go be a drummer and make some money.

I think my problem of rejecting university was, I had no role model, who had a university degree. No one in our immediate family had gone to university.

In high school, I remember classmates talking about it, and saying things like, my uncle is a accountant, and so I want to to into accounting. Or my Dad is a plant supervisor, so I want to go into management. I did not even know that management was a course of education back then.

My classmates that went to university, seemed to have a family member or friend who they looked up to, who gave them in insight into the profession.

I was in the music business till our first child arrived, then I went into the life insurance business, as a commissioned salesman. I was making my living, and supporting my family, in a tough business.

I read an newspaper article about St. John’s-Ravenscourt school, that Dad wanted me to attend in junior high. They talked about how classmates made lifelong friendships. As they grew into the workforce, many would obtain good positions in different industries.

Apart from having a good education, the bonus was their school friendships often would lead them to refer each other to better jobs over time.

It was only then I realized that I had missed an opportunity to provide myself a better life.

Dad had the long term game in mind, and I was looking short term. Not going to university is one of decisions that I look at as a regret in life, especially when Dad tried so hard to steer me in that direction.

The Older I Got, The Wiser Dad Seemed To Be – Song

This song lyrics acknowledge big and little things Dad did to try and help me as a young adult.

Thanks Dad. You did your best for me.