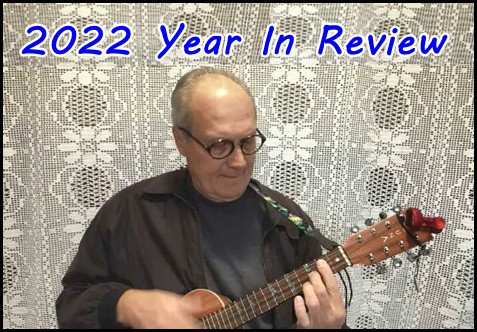 After almost two years of covid restrictions, wearing masks and staying distant, we had weathered the worst of the covid pandemic. We did not get it in the early days when the risk of death was quite high. But as omacron made it’s appearance, we did catch it.

A few days of a raspy throat, and stuffed nasal passages were the main symptoms. We did our first self tests to confirm we had it. It happened on a night when I went to play at a local coffee shop. No more masks, but a few days later, there were five attendees who had caught covid.

I produce one song a month and then at the end of the year, I put those songs together into an album.

This year the album is titled – The Older I Got – The Wiser Dad Seemed To Be. The song was released early in the year, but I thought it was a good song to title the album with.

Other songs on the album include –

Words That Shook My World

Don’t Major In The Minor

Memories Roll Down My Cheeks

Talking To My Younger Self

If You Can’t Change Your Mind

My song themes this year appear to be reflecting on life, and trying to improve yourself or your situation. I need to create a genre name for this, if anyone has a good idea for it.

The Spotify link for the album is –

I get emails from websites like Bandcamp and Spotify that host lots of music. I listen to some ( Spotify gets 50,000 new songs submitted per day ) and try to find songwriters who sound like me. And I am having a tough time finding them.

I think there are not a lot of active songwriters in their 60’s or older. I think we are a rare bunch.

What is my music writing genre ? Well I don’t know, but when I have to choose a genre on Spotify I call my songs Pop from a Singer-Songwriter.

I feel my mixing of the music has improved a lot this year. The software these days, is quite sophisticated. There are so many music effects that can be used in songs, and each one of them has many settings that can be used.

Here is a small list of effects in my software –

Equalizers – one of the most important effects, and there are a number of equalizers to choose from.

Compressors – another important effect with a few to choose from.

Master Limiter – to keep the volume just under the maximum loudness.

Other effects include – Choruses, Delays, Distortion, Flangers, Reverbs, Phaser, and there are many more.

I even have a few effects that are AI – Artificial Intelligence. I apply it to a track, name the effect I want, and the effect does the work, listening to the track, and adjusting the sound based thousands of sounds.

I like these effects because they produce an effect that I can’t produce myself.

I find that to not get bogged down writing similar songs, I need to continue to learn about music scales and chord progressions. From this I find new progressions that I have not used before and can then write songs for them.

This year I started studying jazz chords. I have always liked jazzy sounding chords, and have made some important break throughs in my learning from it.

And that allows me to use this new music knowledge to write songs with a new sound. I already have a jazz style song that I will produce for next year.

My process has been to have an idea for a song, and start writing word phrases and ideas of what I want the lyrics to say. I write them down in a word file, and save it for another day.

Then I come back to it, and work on the lyrics again, and I may be lucky enough at this point to have enough lyrics for a chorus and a few verses. If not, I put it away and try again another day.

Then I look to find a chord pattern that will fit the lyrics. This may take a session or two.

Sometimes I do it the other way around, starting with a good chord pattern and then try to find lyrics that will fit the chord pattern. From my file of lyrics ideas, I will play the chord pattern in my audio software, and read thru the lyrics to see if some will fit.

I produced my first album Balance In Life in Feb. 2020. It was a whole album that I had been working for the last year or two.

In 2021, I decided to produce a song a month. This gives me a month or so of time to work on one song. Then in December, I put it together as an album. The album for 2021 was All Is Right With The World.

These three years of producing original songs has given me some new skills, like improved sound production.

Having been thru it a couple of years now, I see album production as a process, and look to improve the process making it easier, faster, and better over time.

Take a listen to the whole album and the videos – The Older I Got The Wiser Dad Seemed To Be, at this link –

Thanks for being on my email list. You can also help me out by being a Subscriber to my YouTube Channel. Just “Subscribe” from any of my videos. Find the channel on YouTube “Richard Lepinsky” or “ @richardlepinskymusic ”