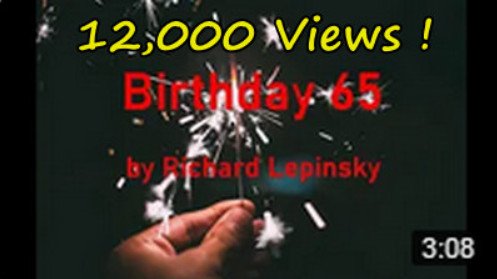 My original song, Birthday 65 is my most watched YouTube video with over 12000 views !

You never know when you post a video, what kind of success a video will have. You never know if it will be your most watched video !

Most of my videos get under 100 views, so to get to one thousand views, is a tenfold increase, and to get to 12,000 views is an accomplishment.

What’s even more interesting is that from the YouTube stats above, my second most watched video is only 10% of what the top video is, at 1235 views.

The digital world is not one I grew up with, so like many people I try to learn the ins and outs. From what I have learned, the “Title” of the Video needs to match what people are searching for on YouTube. If they are not searching for the words in the video title, chances are the video will not get many views.

What Are People Searching For

In my case, the title of the song is Birthday 65, a song about me turning age 65 a few years ago. It turns out that people are searching for songs to send to someone they know, who are turning age 65.

When I realized that, I changed the title of the video to “65th Birthday – Birthday 65”, because 65th birthday appears to be a phrase that people are search for.

The video was released in March 2020, and for the first year, the views were modest. It seems that YouTube’s algorithm takes it’s time in serving up the video on the searches. The majority of the views have been obtained in 2022, and they seem to continue to climb each month.

I also have learned that like many things in life, when someone who has a bigger following than me and recommends you, that can have a big impact on the views you get.

This is what happened with my original song titled – Doing Usual Things UnUsually Well. I had purchased a ukulele pdf book from Brad Bordessa titled Sixth Sense, which was about playing paired strings with an interval of a 6th.

For those who are working with melody lines, I would recommend that you purchase a copy here –
https://liveukulele.com/store/

I had been working on this method of playing, and was able to write a riff using this method, and recorded it in the song named above.

The song had been released for a couple of weeks, and had under 100 views. Brad emailed his students and asked how we were using the 6th Sense method. I replied that I used it in a song and gave him the link to the YouTube video.

He replied and asked if he could mention it in his next newsletter. I replied that he could.

I about a weeks time, I got his newsletter that mentioned that I had been playing a 6th sense riff in the song – Doing Usual Things UnUsually Well.

There was no link to the video, just the text. I thought he probably has to be careful in who and what he provides links for, and I thought it would not amount to much.

But I was wrong. Within a week or so, the views had jumped to about 600 views, and I had increased my subscribers count by about 8 ! Neither of these things had happened before, so I was pleased.

When I thought about it more, I realized that hundreds of these people had to search for the song title, which fortunately was an unusual one, and as of this writing, when put into a search engine, the song comes up first on Amazon. 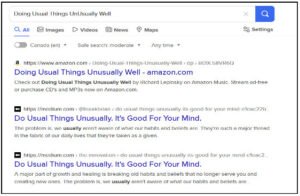 When you look at the second search result, you can see that someone has used the phrase as the title of an article.

If you have not subscribed to my YouTube channel, please do by clicking on the Subscribe Button from any of my videos.