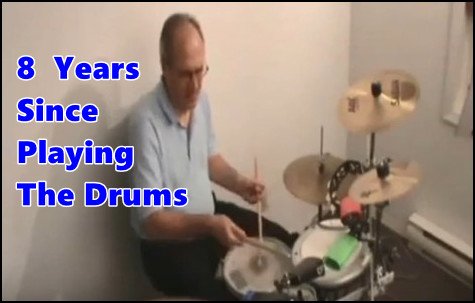 8 Years Since Playing The Drums

My last drumming gig was in Nov. 2010, but I then held up in my little drum studio, creating drum music that I had never heard before.

I quit the band feeling like I wanted to put time into expanding my drum kit and drumming skills, which I did.

I already was using 2 cowbells, 2 wood blocks, and a tambourine on my regular drum kit.

The problem was that I was running out of room to mount new things on the drum kit. If they are not within easy arm’s reach, they are not useful.

I had made some latin drumming accomplishments. Mainly to play a latin left hand rhythm on the snare drum and tom tom, and then solo with the right hand on the ride cymbal bell or cowbells. This was advanced hand independence, that not a lot of drummers work up to.

Then I discovered the Korg Wavedrum. This was a 10 inch diameter electronic drum. I had to buy a small amplifier to play it thru, as it has no sound without an amp.

The wavedrum had about 400 sounds built into it. Each setting had a different sound for the metal rim of the drum and the drum itself.

What I loved about adding the wavedrum to my drum kit, was the hybrid drum sound it produced with long sustained sounds. A regular drum note had very little sustain. The note was finished in about a second. But I could hit a wavedrum sustained note, and it would ring for a handful of seconds.

Only cymbals on a drum kit provided sustain for any length of time, so the wavedrum sounds were a new world of drumming sounds.

I could now play a long sustained wavedrum note, and while it continued it’s sustained ring, I would be playing lots of notes on the regular drum kit, cowbells, and wood blocks.

Around this time I was learning funk rhythms from a book by Jim Payne . I found these rhythms challenging, which is what I was looking for. I enjoyed spending time learning them, and recording them on a digital voice recorder and videocam.

Then I started adding the wavedrum sounds to these rhythms and they took on a whole new sound. This was very exciting, because I was not aware of anyone else playing these kinds of drum sounds.

We moved in 2013, and I decided to sell my drums. The audio and video recordings sat on my hard drive for seven years, and I thought nothing more about them.

One day I was listening to them, and thought these are really good. I had always wanted to make a “drum only” album, and realized that these recordings would be it.

In the summer of 2020, I released this “drum only” album titled – Richard’s Best Drum Rhythms of 50 Years.

It contains 4 tracks, each about 12 to 15 minutes long. These links are to the YouTube videos and titles include –

I have been going back to this drum album and taking some of my favourite rhythms and trying to integrate them into my songwriting.

Now with audio software, with most every instrument known to man built in, I will not be buying a physical drum kit anytime soon, as there are so many drum kits to use within the software.

There is something to be said for live drum playing that is hard to duplicate in the electronic world. Based on that, to some degree, my old recordings will be one of a kind.

Lots To Work With

I am starting to experiment with melodic riffs on percussion instruments like marimbas.

Like all things in life, they evolve. And so to it is with music, musicians experiment with different aspects of their music, creating new areas to work on and listen to.

I am a creator at heart. Even though I have been away from the drums for 8 years, rhythm is still with me, and will be part of my music in one way or another.