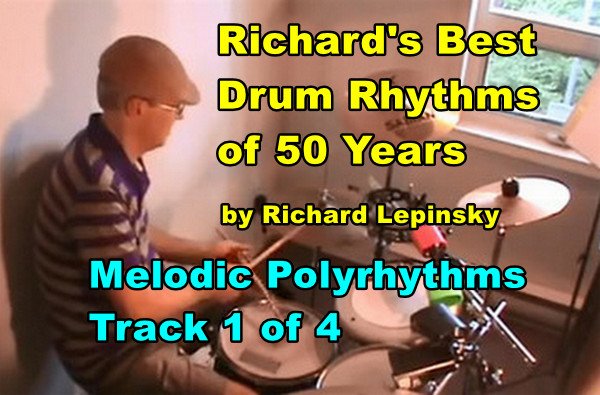 Melodic Polyrhythms is track 1 of 4, from the album – Richard’s Best Drum Rhythms of 50 Years, a swan song to Richard’s 50 years behind the drums.

Richard started playing the drums at age 11, He played professionally in his early years, then on and off throughout his life. The last few years, he pushed the limits of a standard drum kit by adding more sounds to his drum kit.

His added percussive sounds produced one of a kind drum sounds, and this album – Richard’s Best Drum Rhythms of 50 Years, is the result.

He found the Korg Wavedrum. An electronic drum with a few hundred sounds. It required an amplifier to output the sounds to, but this was a big step forward.

Richard felt that these recordings would provide ideas to up and coming drummers, and the drum community at large.

This video Melodic Polyrhythms is track 1 of the album. The other video tracks will be released in the coming weeks.

Take a listen to Melodic Polyrhythms and see !

at the following links –

Balance In Life the album

He released his first album of original songs in February 2020 titled – Balance In Life.