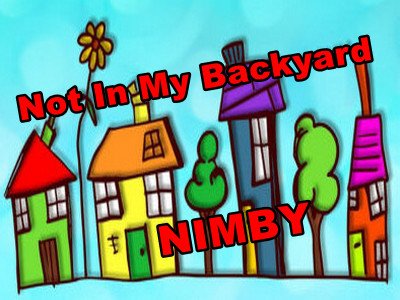 NIMBY – Not In My Backyard – song history

I was at a Rotary meeting, that the town mayor and counsellors were also part of. They were talking about problems they were having, because citizens objected to allowing certain building developments or bylaw changes close to their property. The comment was made that the main complaint was NIMBY.

I did not know what NIMBY was so I asked them. They said it stands for – Not In My Backyard .

Wikipedia defines NIMBY as – a characterization of opposition by residents to a proposed development in their local area. It carries the connotation that such residents are only opposing the development because it is close to them and that they would tolerate or support it, if it were built farther away. In some cases, NIMBY opposition can be overcome through an open process and impact mitigation. The residents are often called Nimbys, and their viewpoint is called Nimbyism. The NIMBY tendency has been described as a bipartisan phenomenon.

I thought it was a catchy term, and decided to write a song about it.

As I thought about the problem, I suspect that we all have at least one NIMBY issue. It may never become a problem for most of us, but I suspect that city counsellors and bylaw personnel have to deal with these kind of issues every week.

I have no solution to allowing a drug rehab centre or a marijuana retail store ( or any other undesirable business or group of people ) to live or operate close to your house, living accommodation or your child’s school, other than to say go further down the street, or to the next neighbourhood.

From the town or city’s point of view, these people or businesses need to be allowed to settle somewhere, so why don’t you, live and let live.

Many people will have emotional reactions to these things, because these activities will negatively affect their life and / or property, and they say – Not in My Backyard.

The objections can be in the form of homeowners who are against having a large construction project in their neighbourhood, that will affect their property values.

The second negative use of the phrase NIMBY, is with regard to social service and environmental justice groups that imply that the developers do not have a social conscience when it comes to a certain class or race of people.

The – Not in My Backyard Phenomenon  Check out this article on it.

YIMBY – Yes In My Backyard

There is even a new acronym – YIMBY, which means – Yes In My Backyard. This movement seems to have started in the larger US cities, and looks to work with land and building developers to create the type of housing that is needed in the communities.

They have become a pro-housing, pro-density constituency in their respective cities that hadn’t been at the table previously. In Boulder Colorado, a YIMBY group called Boulder Forward, has organized a YIMBYtown conference around the issues. Now there is YIMBYism.

One of the issues is that low income people can’t afford to live in high opportunity cities. This has been an issue in Vancouver, where restaurants before the pandemic were said to be 30% under staffed, because these jobs would not pay enough to allow them to pay rent in Vancouver. The push to create lower cost housing, allows opportunity for these lower income people.

The Atlantic has an article on it here –

With no solution to the nimby problem, the song lyrics focus on emotional words that may be part of the feelings about an Nimby issue.

NIMBY – Not In My Backyard is on the album Balance In Life.

Watch the lyric video of this song here.