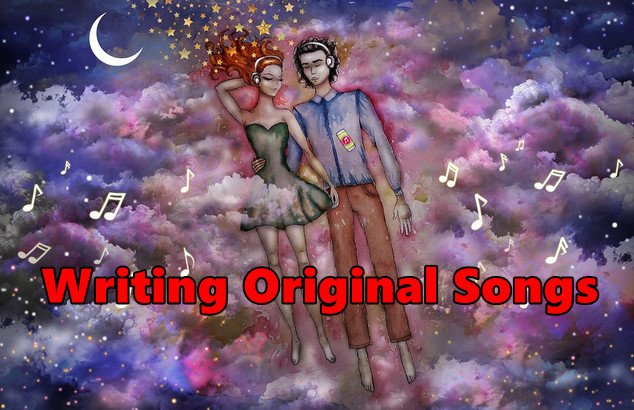 I tried to write my first song when I was in my early 20’s, but I had little chord progression knowledge and never finished it. The next song I wrote I was in my 50’s. It was new words to a familiar chord pattern.

I realized then I could write original songs.

I had spent the first 50 years of my musical career behind the drums, starting age 11. I made my living playing drums in bands that worked in clubs and pubs around western Canada, as my first full time job.

From the experience of playing in bands, practising top 40 songs, and band members writing original songs, I had an understanding of how music should sound, and the process of making music.

As a 20 something drummer, I would love to hear humorous or silly song parodies of famous songs, often done by comedians on TV shows.

This fun lyric creation process caught on and while working with bands, someone would make up new funny lyrics to a song we had been practising. We would have a few laughs and carry on.

Music In Our Brain

After I got married, my wife and I would be having a conversation, and some words in the conversation would remind us of a song, and we would start singing that song, sometimes at the very same moment.

Music is Deep in The Brain

I saw a TV show about a elderly demented man, who did not know his own name. In his earlier years, he had sung in a choir. One night the choir was performing at his seniors home, and his daughter put him on stage, with the choir.

He was able to sing every word of the song they sang ! Yet he did not know his own name. You would not think that is possible, but it shows that music is stored and preserved in a different or deeper part of the brain. It is amazing that the music we love, can remain preserved even when the rest of the brain has been damaged.

Music is Deep in Our Souls

I think music us deep in our souls. I will remember a line of two of lyrics of a song that I have not heard in years. They can be brought on by a certain thoughts or feelings.

Everyone loves a good story, don’t they ? Some songs are great stories. I spent hours listening to the late Harry Chapin and his album – Cat’s In The Cradle. I also liked the story songs of Billy Joel, like his Piano Man song.

I admired the ability to craft lyrics into music and tell a great story. I think we relate to the emotions of the story.

I was a teenager when the protest songs of the 60’s gained popularity. I was impressed that someone could write a song like – If I Had A Hammer or Where Have All The Flowers Gone. These songs were sometimes metaphors for things happening in society, but did not mention the issues directly. That is a special type of songwriting.

As I grew older, I read a lot of business books having been attracted to their titles. Some delivered good content, some did not, but that’s what you get when you judge a book by it’s cover or title.

I started to collect words and phrases that I would pick up in books, articles, from a movie or a TV show. I would write them down in a computer file. Sometimes it was just the phrase which could be the title or chorus line of a song. Over time, I would write additional lyrics about that topic to create verses of the song.

Quotes and news stories are also a good source of lyric writing material. They provide the essence of a situation that you can create a song about. Here are a few I have sitting in my lyric scrapbook file.

The Hong Kong protesters were quoted in the news – “I’d rather die standing, than live kneeling.” This was their feelings about China taking away their freedoms, and it evokes feelings in me, that I could write a song about.

I like to watch documentary films, and there are so many good ones about social issues. I’m surprised that songs are not written for these documentaries. I think a good song could be written for each of them.

I wrote a song titled The Occupation Song. It was about a young man starting in the work force today, thinking how hard it is to save money to buy a house and start a family.

Here are the first couple of verses of The Occupation Song –

My Dad told me to get a good education

So I went to school and learned standard deviation

I turned 25 and needed an occupation,

Please give me a job and an occupation

I need a promising and well paid vocation

That will allow me to take an annual family vacation

And raise a family and allow a few celebrations

I interviewed today with a company that does consultation

They were not impressed with my motivation

I’ll become self-employed and earn my own compensation

Not without Dad helping with loan capitalization

Writing A Song A Day

I am inspired by Jonathon Mann who has been writing a song a day for over 4000 days ! He posts them to his YouTube Channel – https://www.youtube.com/watch?v=W4L6hEbRXP4 .

He talks about how you have to practise writing songs, and he feels 70% of those songs are OK. Twenty percent will be no good. But 10% of them will be great ! I understand the practise part, as I spent many hours and years practising diligently as a young drummer.

Many Ways To Create

Creativity can be a mysterious process. It’s like reaching into a room with no light, and pulling out something that you created.

The one the caught my attention was her second point – There are few activities in life that utilizes the entire brain, and music is one of them.

Article – These 12 facts about music, and how they affect your brain, will astound you!

Give Original Songwriting a Try

Even if you think you can’t write songs, give it a try. The next time you feel strongly about something, good or bad, start to jot down your feelings. I’ll bet you’ll find a song in those feelings.