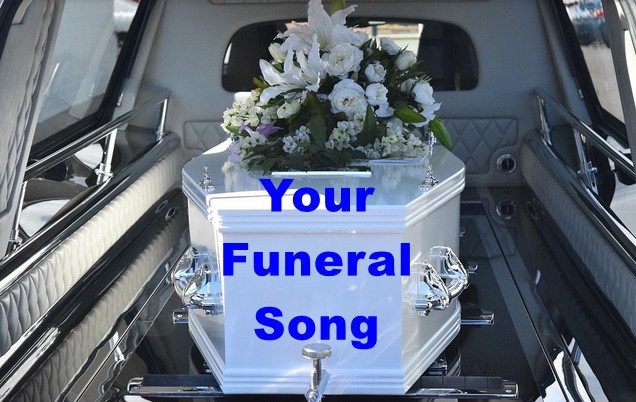 I recently watched on TV, some of the funeral for RBG – Ruth Bader Ginsburg, the supreme court justice of the US.

What Is Your Funeral Song ?

It started me thinking, what song do I want to be played at my funeral ? Do you have one song that you feel sums up your life ?

I started to think back on the latest funerals I have attended. One was for my mother. She lived into her 80’s and had regularly attended church since I was a kid. She was long time supporter of her church.

To her credit, Mom had planned out her funeral service including the hymns to be played. I played and lead the song Morning Has Broken.

I knew it as a song by Cat Stevens from back in the 70’s I think, and was surprised to see it was a hymn in the Anglican Church Hymnal that had been written decades earlier.

I give my Mom credit for planning her funeral down to the songs and the sermon. I don’t think many people do that.

Funeral Music For Our Son

About 16 years earlier, my wife and I buried our only son Nathan, when he was fifteen years old. He died of a short term lung disorder in the hospital.

In planning the church funeral service, the minister had picked a few hymns, but asked us if there was a song we would like played. We answered – From A Distance by Bette Midler.

The song was on the radio at that time. We had listen to her album with that song repeatedly thru Nathan’s three week stay in the hospital.

It became part of our grieving music collection that helped us thru those early days of grief.

Instrumental music can be played in any country of the world, and everyone can get something from it. There are many songs with melodies that are recognizable around the world.

You may not have thought about it, but funeral directors are the experts when it comes to funerals. Funeral directors plan and attend a lot of funerals. They can tell you the most popular songs that are played at funerals, based on the reactions of those who have attended.

Music is an important part of a funeral. Music takes the spoken word to a new level with song lyrics and the music creates an array of emotions onto which the lyrics are placed. We enjoy the total effect of both music and lyrics.

This article lists the top 25 songs played at funerals.

You Can Close Your Eyes by James Taylor

Tears In Heaven by Eric Clapton

Somewhere Over the Rainbow by IZ the Hawaiian ukulele player

It is hard to pick one song that sums up your life or that of a family member or friend, because we all have many facets of our life, that could be expressed with a song or songs.

To answer my own question, I have two answers.

My first pick would probably be an original song I wrote called, Every Form of Refuge. But because it is not well known ( like most original songs ), I could select a more well known song.

That song would be for me, Fly Me To The Moon, a Frank Sinatra song from the 1950’s. I like swing jazz rhythm and the somewhat whimsical lyrics about living life to the fullest. Here is a ballad version of  Fly Me To The Moon.

Being creative is a big part of my life, and I keep looking for new creative experiences.

So if you don’t have a song picked out for your funeral yet, give it some thought.