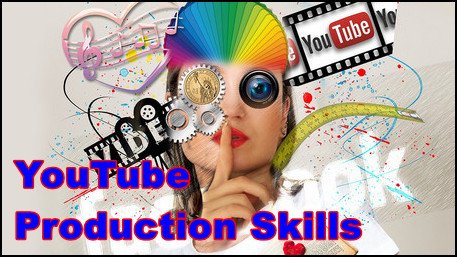 For as long as I remember I have liked trying new things, especially creative things.

As I saw YouTube become a video social media platform, it felt out of reach until I got a video camera. I then realized how easy it was to post videos on YouTube. That was one of my first YouTube Production Skills.

My early YouTube videos were shot with my handycam video camera, I chopped off the start and end pieces that took time to get back to the camera, and I posted it.

I have moved onto writing and producing my original songs and making lyric style videos. Most everything evolves and so did my YouTube Production Skills.

Songs start out as an audio format with sound only. After I have written a song, I record it into my audio software called Mixcraft made by Acoustica.

I have a microphone into which I have to sing and play my ukulele. The sound is recorded into the audio software. Most of my songs have about 12 individual sound tracks or more.

The drums have about 4 tracks for the bass drum, snare drum, cymbal, and hihat. The bass guitar which I produce from digital instruments within the software has one or two tracks. I use other digital instruments like piano, synthesizers, horns or strings.

Put together with the vocal tracks, I have these tracks together in the software, and I have the starting point of a song production.

Now I try to be a sound engineer. It is an occupation unto itself. I now look to enhance the overall and individual tracks of the song to sound better, using various plugins within the audio software. Things like – equalizers, compressors, reverb, delays, and many more are available to use. Some plugins also have their own AI – artificial intelligence, that will mix a track according to certain perimeters that you specify. At some point I get a song that sounds as best I I can make it.

I then submit the song to one of a handful of distributors, that will distribute the song to the various platforms that sell it, or stream it.

This is all done online. I have to log onto my account, submit the song and song artwork. It gets checked at the distributors end, before it is approved and sent out to the various suppliers. The audio portion of the song is done.

Now I make a simple video to accompany the song. You only have to watch a few music videos on any of the music TV channels to see music videos that are big productions that cost $1000’s of dollars.

I am starting to see credits at the end of these videos, for the video production people and companies. It is a big job in itself.

I make a simple video of my singing the song. I sing it to the fully produced audio that I have created. I do a few different takes from different angles, upper body shot, up close, from down low looking up. I can then use these different takes in the video, one for the chorus, another for a verse, etc.

The video track is done within my software, although most audio programs do not have this feature, and I would have to use a separate video editing program.

After I have completed the video, I have to format it, into a format that YouTube will accept. The software does this for me, but it is another step in the production process. I upload in a format called MP4.

On all YouTube videos there is a picture that is shown on the screen before someone clicks on the video. This is called a Thumbnail. A picture of what you want to show as the first thing people will see.

Once you have the Thumbnail picture, I will usually need to put some words right on the picture itself.

Faststone Capture will also do this for me. There are many fonts available in many sizes, and you can make the words into different shapes and accent it with things like arrows, comment bubbles, etc.

YouTube has something called End Screens. Most videos at the end, will have a selection of other videos to watch, which I can program when I upload the video to YouTube.

I also have to write notes about the videos to be included under the video on the YouTube page, where it is displayed. These can be used to explain, how the video was made, what it is about, or additional informational links that people may want to click on, to find more info.

My video is now completed ! Production would have taken hours at this point. Now I have to log onto my YouTube account, and upload the video, go thru a number of other YouTube selections and the video uploads, and shows up on my video list as a new video.

While YouTube relies on their algorithms to promote the video, it is up to me to give it some initial promotion. I do this by posting it on Facebook and Twitter. Some people will use other social media platforms like TikTok too.

Songwriter – to write the song

Videographer – to video a lyric video

Video Editer – to edit and create the final video

Adminstrator – to administer the process start to finish

Publicist – to create the notes of the video

Promoter – to promote the completed song and video

As I come to the end of 2021, the term Lifelong Learning comes to mind. While I have always felt that I have been a lifelong learner, doing YouTube production has forced me to learn many new things.

Maybe you are a new smart phone user. You need to learn new things about the smart phone. It seems that technology pushes us to continue to learn, even if we did not want to.